How Much Waste Do We Really Produce?

As Americans, we create an enormous amount of trash. The average person produces about 4.5 pounds per day, and most of it is comprised of recyclable items.

If you compare the amount of garbage that Americans create to the global average of 1.6 pounds per day, we’re on the high end. To keep up with the increase in curbside pickup volume, landfills have grown in number. Space is quickly filling up, and that rate will increase now that China has banned foreign waste. 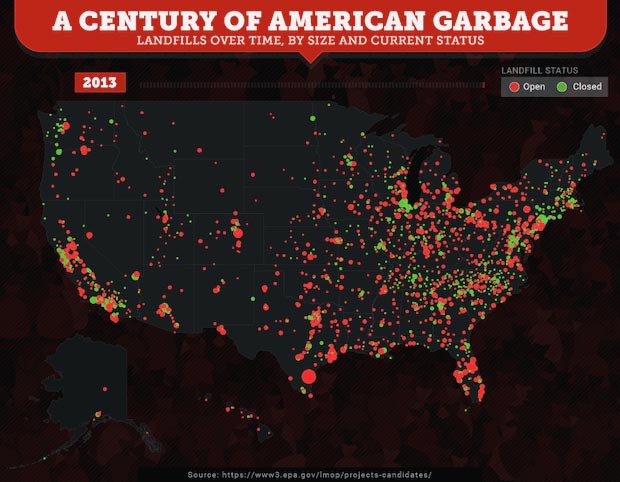 Exactly How Much Garbage Do Humans Make Every Year?

The average American consumer produces just under five pounds of trash each day, while a family creates about 18 pounds. Multiplying those numbers by 365 days for the year, it all adds up to:

These numbers are considerably higher than the averages for residents in other nations. For example, in Europe, the average amount of trash generated by one person in a year weighs in at 1,073 pounds. 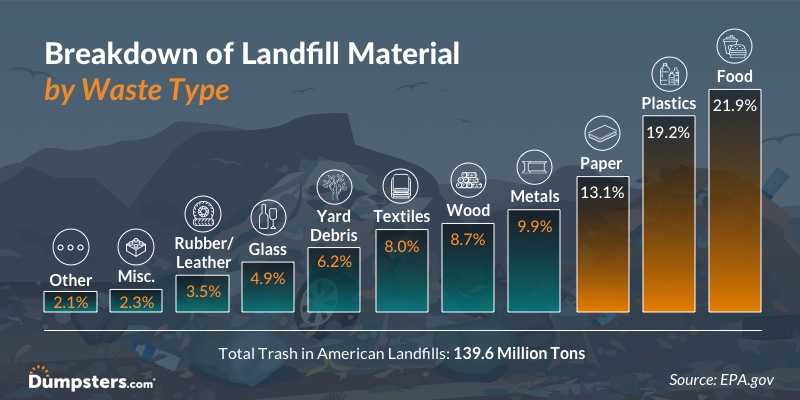 What Items Do Americans Throw Out Most Annually?

Every year, U.S. landfills are filled with 139.6 million tons of waste, including:

While plenty can’t be reused, nearly a third of what we toss can be recycled, particularly if your local government offers curbside recycling. However, sometimes single-stream recycling can cause more harm than good. Confusion about what materials are recyclable and improper cleaning before putting an item in your bin can lead to contamination. When this happens, usually the entire load of recyclable materials ends up in a landfill.

So, Where Does All This Trash Come From?

The 268 million tons of landfill and recycling waste generated in the United States each year is primarily paper and paperboard waste, both of which can be recycled. For perspective, Amazon ships an average of 608 million packages per year, most of which are in paperboard boxes. According to the EPA, nearly 47% of paper and paperboard is recycled, meaning about 304 million Amazon boxes end up in landfills each year.

Other large sources of trash include food waste, yard debris and plastics, which also have alternate disposal methods.

According to UpStream, products and packaging account for as much as 71% of the waste stream in America. Packaging alone accounts for about 26%.

Most of our waste consists of single-use products. For example, think about your daily venti Starbucks coffee. The short lifespan of convenience items like these has led members of the green movement to dub us as “the throw-away society.”

Making a Difference: How to Tackle Our Trash Problem

To increase recycling rates, municipalities are testing single-stream recycling. Rather than residents sorting plastic, glass, cardboard and paper, it’s all put into the same bin. Waste is then taken to a materials recovery facility, or MRF, for sorting and recycling. While this program has benefits, some cities can’t afford the sorting technology.

If your city doesn’t offer single-stream recycling, read our Recycling Guide for tips to simplify the process and ensure that all your recyclable items make it to the right facility.

"Recycling is a great way to reduce what goes into a landfill, and it also saves energy. It takes far less energy to repurpose recyclables than to make glass, plastic, paper and other products from scratch."
Arthur Murray | Save On Energy

Waste-to-energy plants use trash as a fuel to generate power. “In 2015, the latest year for which stats are available, 71 waste-to-energy power plants and four other plants burned municipal solid waste, eliminating 29 million tons of garbage,” Arthur Murray of Save On Energy explains. “They generated nearly 14 billion kilowatt hours of electricity – enough to power nearly 2.5 million homes for a year.”

Outside of recyclable and compostable items, biowaste and commercial garbage are ideal candidates for combustion.

"For every 100 pounds of municipal solid waste in the U.S., more than 85 pounds can be burned, releasing heat that can turn water into steam that can turn a turbine to generate electricity, according to the U.S. Energy Information Administration. Take 85% of the garbage our of every landfill in the U.S. and all of a sudden you've opened up a lot of room."
Arthur Murray | Save On Energy

Another easy way to cut down on our trash problem is to compost. Yard trimmings account for 6.2% of waste put in landfills, yet organic matter can naturally decompose on its own.

In fact, the composting trend has already started gaining steam in the U.S. In 1990, Americans composted just 4.2 million tons of yard trimmings. In 2017, that number had increased to 24.42 million tons.

Whether it’s to gain the benefits of recycling organic materials at home or because your municipality is one that has embraced green landfills, composting is quickly becoming a leading way to combat America’s trash production.

Small changes add up to make a world of difference. For instance, the U.S. uses 102.1 billion plastic bags each year, so simply bringing reusable bags with you to the grocery store can drastically cut down on the amount of trash sent to landfills every year.

Food waste is another major source of waste in U.S. households, but composting technology is making it simpler to recycle your orange peels. Consider placing a small compost bin on the countertop or under your sink to collect kitchen scraps for your compost.

Take an active role in reducing the amount of trash you throw away each day, and you might be surprised when a week goes by and your garbage can isn’t as full as it used to be. Pros and Cons of the Plastic Bag Ban Debate

By 2021, at least eight states will have banned plastic grocery bags. What is the legislation in your state?

Zero Waste vs. Zero Landfill and Why the Difference Matters